Sylvia D. has been selected as the Christopher Smith Foundation’s November Caregiver of the Month. 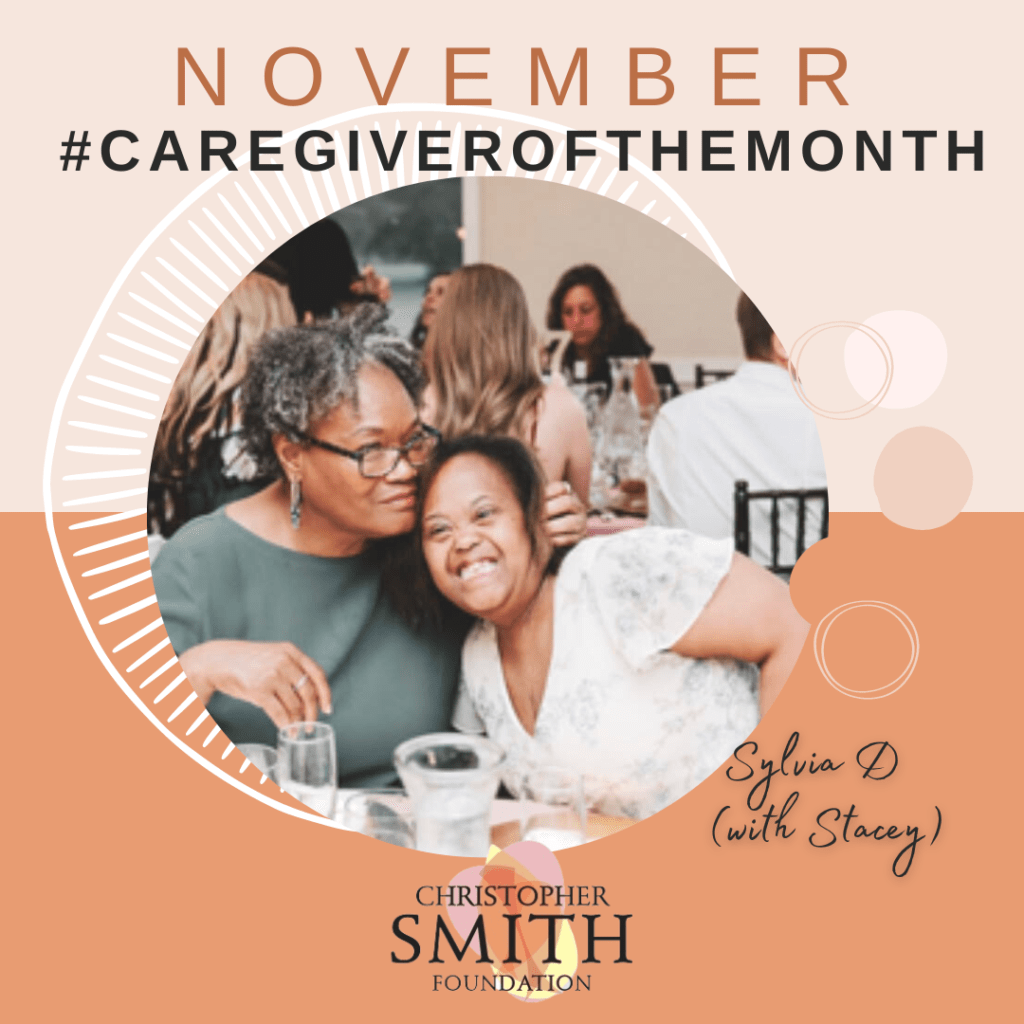 My story is that I’m just a mom that is trying to make all the right decisions for Stacey and my oldest daughter Samantha.
So far the decisions have been on point.  I’ve tried to insure they both grew up to be kind, happy, considerate, thoughtful & caring of others.  I think I’ve succeeded.
In my opinion my job as a parent was to make sure they enjoyed their life, to be confident in who they are, to question, not just accept everything that is thrown their way.  For Samantha it’s to think critically.  For Stacy to not be afraid as I’ll be there for her always, as will Samantha.  We will help guide you through the world.
When Stacey was born 2 1/2 months pre-mature.  I knew in my gut, when I was pregnant that she was going to have Down syndrome…I just knew.  I had an emergency C-Section with an ambulance blaring the whole nine yards.  She was born on 07/28/84.  After her birth I asked the hospital to perform a genetic test-it came back as having her being diagnosed with Down syndrome. She  also had a heart condition with occurs in 30% of all Down’s baby’s born.  Her Birth weight was a little over 3lbs, and as is commonly known, a baby born at at that weight, 38 years ago, survival was limited.  The primary issue for her survival was her heart condition, and the hospital worked like crazy to get her to 5/6 pounds. In the end the were unsuccessful. Four months later, In October of 85’ I asked the hospital if I could bring her home as she wasn’t getting to 5/6 pounds for her heart surgery.
I had done some extensive did research at the Public Library and decided to ask the hospital in secret (I didn’t even tell my ex husband/her father) what I was going to do which was ask them could I bring her home. I also requested a Cardiac Nurse for a few hours a day all the medical equipment that would be needed for at home care.  They agreed.
I had reasoned that no one can really get well in a hospital setting, the noise, the constant poking and the the over-all atmosphere.
Once home; with medical equipment, cardiac devices, monitors and electronic leads all over our home, she began to thrive.  I took a leave of absence from work and would take public transportation everywhere with her oxygen on my back or shoulder  and her in a gym bag.
We traversed all over San Francisco Bay Area together.  I won’t go into everything I did and we did as a family – – but it worked.  She eventually got to 6 pounds, heart surgery done and here she is.
I could go on and on but I won’t belabor the point of me being a parent that was not afraid of having a child with a disability.   Both my children bring me joy.  Is it sometimes difficult …yep.  But that’s Ok, it’s nothing major, you either accept what life has given or you don’t.  The alternative for me was not an option.
In the end, I’m just a mother trying to get Stacy from point A to point B and then C etc., etc.
The most discouraging fight, is with the general public, and their attitude and opinion of someone with a disability.  All my family and friends enjoy being around both of my kids.
Stacey does bring me special joy, because I know the struggle she had staying alive.  I could go on and on about the adventure & fun of Stacey’s and my life – – some up – some down – some sideways, some boring.  But for me it’s just a life and she is part of it.
Article provided by Sylvia D., Caregiver of the Month
Jason Smith2022-11-29T07:48:17+00:00November 29th, 2022|
SUBSCRIBE TO MAILING LIST