Mother and Disability Advocate Recognized as Caregiver of the Month 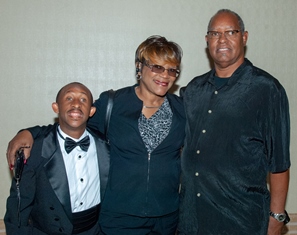 So many people are deserving of recognition of their caregiving activities for their family members and countless other people with disabilities throughout our state. The Christopher Smith Foundation recently acknowledged Regina Daniel for her role as the caregiver of her son, Reginald, 31, as well as the President of A Team NV, a non-profit organization that advocates for people with disabilities and their families, and builds awareness of the issues they face.

“Getting that award from the Christopher Smith Foundation made me feel that I’ve done the right things at the right time,” Daniel says. “That’s what really made it special. You do things because they’re the right thing to do, but when someone notices, you feel good. Receiving this award has emboldened me to be more of an advocate.”

“When you do good things for other people, sometimes you get blessings you don’t expect,” she says, explaining how being her son’s caregiver has enhanced her life. “I’ve always called myself a ‘blender’. If Reginald is invited somewhere, I’ve always taken him and just blended into the background. I’ve never wanted to take the focus away from him and his peers.

Regina says that she and her husband, John, have devoted their lives to the reality that Reginald is never going to be able to live independently. “He’s lived with us his entire life and he probably always will, but it’s been a double-edged blessing, because we were told that Reginald was never going to walk or talk, and he does both. Reginald is involved with Special Olympics track and field and basketball., where his dad, John, is a coach and he is also involved with the choir at church. Reg is inspirational because he’s always so enthusiastic, and his success just emboldens me to share more. I believe that the more of an advocate I am, the more opportunities it opens up for Reginald. The biggest barrier for most parents is lack of information. If you don’t know who to ask, or where to ask, then you don’t get the eligible benefits or services. We can become overwhelmed if we don’t know there’s light at the end of the tunnel, and sometimes that light is just knowing that you did all you can do.”

Regina says that Linda Smith’s work both as the former Resource Development Director at Opportunity Village, and as the mother of Christopher, made an impression on her and inspired her in her caregiving and advocacy activities. “Linda reached out and noticed Reginald when she was at Opportunity Village, and I started to notice her and her son, Christopher. It was really a two-way thing because I was inspired by the dedication she had, the way she cared for Christopher. Seeing that type of love helps parents like me and gives us the will to move forward.”