DONATE
DONATE
Marie Branchini Recognized as Caregiver of the Month

Marie Branchini Recognized as Caregiver of the Month 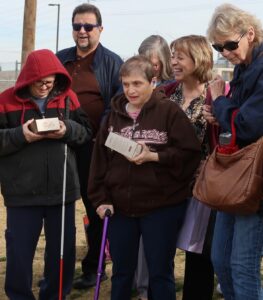 Brother and sister John and Lia Riccobene were born with developmental disabilities, and have required a lifetime of attention and care from family members and others. Their older sister Marie Branchini has been recognized by the Christopher Smith Foundation for the many years of love and attention she has given her siblings.

“I was excited to be unexpectedly recognized and honored that Christopher Smith’s name is attached to the award,” said Marie, who was surprised to be presented a much-deserved caregiver’s award. “Linda Smith has changed so many lives, not only by what she has done but what she continues to do.”

John, 61, and Lia, 57, both work at Opportunity Village and in addition to their developmental disabilities, both have vision issues and require Marie’s attention pretty much around the clock except for when they are at work.

Since 2011, when other family members became unable to continue their roles as caregivers, Marie became the sole caregiver to her siblings. Their father was Las Vegas entertainer Johnny Ricco, who also watched over John and Lia for years, during a time when successful Vegas entertainers had more demanding, and often erratic, schedules.

“Up until they were in their mid-20s they could see,” Marie says. “Now they can just see shadows, see light and dark. Johnny can still see in one eye, but it’s like looking through a straw. Eventually, that will close, and I’m dreading that day because he loves to read. When Lia lost her sight she also lost her balance, so I have to hold her arm to help her walk.”

Being responsible for two adults with disabilities 24/7 can be very difficult, and Marie does get some respite when John and Lia are working at Opportunity Village. But quality time to take care of the everyday tasks of life, and to really take a deep breath, isn’t always easy to come by.

“It’s a hard thing,” she says. “Thank goodness I have that break in my life while they’re at OV. I can’t imagine not having that, and still being a full-time teacher too.”

“I have lots of friends in Las Vegas,” she continues, “but as soon as John and Lia came into my life, it meant I couldn’t always do the social thing like I used to do. So I kind of made a social group of people who are in my boat, who have children with disabilities. Some of us have become good friends because we understand each other’s world. I also have a book club that meets at my place once a month. And I still try to get away with my old buddies for lunch once in a while.”

Like of the caregivers presented with a Christopher Smith Foundation award, Marie is dedicated to her siblings, and deserves recognition because of the selfless role she plays in their lives.

“I can’t help but love them,” she says, “because they’re so grateful for everything I do.”