DONATE
DONATE
Judith Koller Recognized as Caregiver of the Month

Judith Koller Recognized as Caregiver of the Month 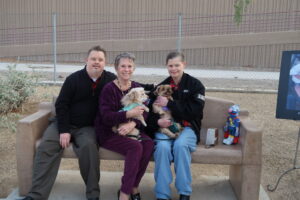 Judith Koller is the mother of two very special men, sons Scott and James Ruggles, whom she has acted as primary caregiver for their entire lives. In addition, she is a director of A Team NV, a non-profit organization that advocates for people with disabilities and their families, and helps build awareness of the issues they face. At a recent ceremony honoring caregivers for people with intellectual and developmental disabilities in the Las Vegas area, Judith was recognized by the Christopher Smith Foundation for her undying dedication to her sons, as well as to families of people with disabilities in Nevada.

“I was shocked!” she exclaimed, as she described her reaction to receiving a caregiver’s award from Linda Smith, founder of the CSF. “I didn’t even know about it because I was late getting to the ceremony, but I was in shock. It was quite a surprise. I thought the event was about dedicating a bench to Christopher in his honor. Linda’s known for doing things like this.”

Judith’s sons – 53-year-old Scott and 49-year-old James – have always lived with, and been cared for by their mother who has beaten obstacles that many of us could never triumph over. She is divorced from the boys’ father, and she – and her sons – subsequently endured the deaths of her following two husbands, both from cancer.

“My sons have been such a help because it’s not been an easily-run life for any of us. They’d gotten to love both of these men, and when they died, my sons had a hard time. But they managed to get through it and they knew they had to help me, and they have. They helped me in so many ways. They physically helped with some things, but it’s also mental and emotional help. They showed more compassion and more help than many people could. They don’t stop and think about things – they just do. They’re really good guys. It’s not been an even life for them, they’ve had a lot of ups and downs.”

But as much as she is quick to give her sons credit for helping her through her struggles, she downplays the contribution she herself has made to taking care of them.

“They are my life, basically. I do have my own friends and I go out with my friends, but basically everything I do is worked around them. They have to have some kind of management, because they can’t drive. They do take paratransit to work at the Engelstad Campus at Opportunity Village, but driving is what I do. I’ve done it for so long I don’t even think about it, it’s just an automatic thing, it’s just something I do. They need things, there are things they want to do. It’s always just the three of us and our two little female dogs.”

Judith says that she believes other parents of disabilities feel the same way she does about caring for their beloved children.

“We don’t think about it, we just do. Many of us who have children with disabilities know each other because we’re all basically the same things – we are the drivers and we are the caregivers. My sons would probably love to do things without me,” she chuckles, “but they can’t. They’re always our children no matter how old they are.”