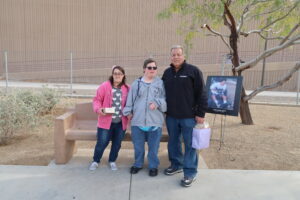 Joey Calarco has been recognized for his dedication and devotion to his son, Nicholas, with a Caregivers Award from the Christopher Smith Foundation.

“I’ve known Linda for a long time,” he said, “and when she called me up and told about [receiving an award from the CSF], I said, I don’t know why I would be getting an award. I don’t do anything. I just take care of my son. That’s what were supposed to do as parents.”

Nicholas, now 33, has Down syndrome, is a high-functioning individual who has held down a number of jobs at Smith’s Food King, a deli, the Clark County School District, IHOP and Opportunity Village.

“He pretty much gets himself ready in the morning, and he calls us and my wife picks him up,” Calarco said. “He spends the day with us and goes to the gym three days a week. He’s pretty active.”

Although Joey received the award, he makes it clear that he isn’t alone in caring for his son – it’s a family effort, and not really an “effort” at that. Nicholas is blessed to have a large support system of family members who are not only available to help out when needed, but who actually make it a point to include him in their lives.

“It’s no sacrifice or burden at all for people to help out,” he said. “Everybody loves Nick and will do whatever they need to do for him.”

The Christopher Smith Foundation is honored to recognize Joey Calarco as a Caregiver of the Month award recipient.