DONATE
DONATE
Cynthia Cicero Recognized as Caregiver of the Month

Cynthia Cicero Recognized as Caregiver of the Month 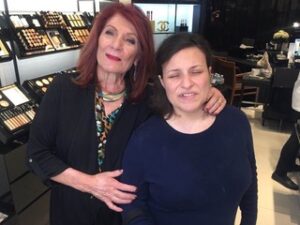 Being the single parent of a child with an intellectual disability can present a unique set of challenges, and each parent deals with these challenges in their own way. Such is the case with Cynthia Cicero, who is essentially the sole caregiver for her daughter, Dana, as well as for her husband, who is in the early stages of dementia.

Dana, 38, who her mother describes as “moderately intellectually disabled,” works for Progressive Choices, a vocational training center for individuals with physical and intellectual disabilities in Las Vegas. As Cynthia’s husband is dealing with his own issues due to his dementia, he is unable to contribute much to Dana’s care.

“It’s pretty much just me,” Cynthia says. “I’m kind of sandwiched in between them.”

A gregarious and upbeat person who clearly embraces life and takes each day as it comes, Cynthia has figured out how to cope with the demands of being a caregiver for a child with disabilities, as well as keeping an eye on her husband.

“I take Dana to work in the morning, I get her there by 9:00 or 9:30, and then I pick her up at 2:00. And in between that, that’s my time. I enjoy Pilates, I take dancing, I have that time to myself. It’s to keep me going, to keep me socializing. Otherwise I don’t know what I would do. I know there will be a time when I can’t do it anymore. But you know, for now, you just do what you can and what you have to.”

As with everyone, people with intellectual disabilities face various obstacles in their day-to-day lives that require the attention and patience of those who love and care for them.

“We all go through difficult periods in life,” Cynthia says, “and Dana has had some difficult times, like where she once had screaming episodes, and a time where she became catatonic for a while, which was the most serious thing we had been through. But we got past it and we’ve moved on. You have to.”

Cynthia was recently recognized at a luncheon by the Christopher Smith Foundation’s Linda Smith for her dedication to her daughter’s well-being. She said that parents of children with disabilities do what they do for their children out of love, and don’t expect recognition or reward. But she also doesn’t mind a little positive reinforcement.

“It’s nice to get a little pat on the back, it’s nice to hear a ‘thank you.’ We all like a little appreciation now and then, even though we would do what we do for our children anyway.”