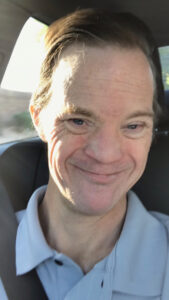 Christopher loved to shred paper, one piece at a time, one piece every hour or two. It was his favorite thing to do at his day habilitation program at Opportunity Village.  On payday, when checks were passed around, my boy waved his stipend check and then fed it into the shredder with a satisfied smile… there goes another one.

His ‘vocation’ started at home with an under-desk shredder. After many tries, success… a piece of paper would be forced through the mechanism, torn into slithers, and dropped in uniform pieces into the home shredder. His routine became the inspiration for a cottage industry at the Village, a business that bloomed and has sustained its many workers for more than 20 years. Standing for hours at the conveyor belt, no amount of encouragement would make my kiddo grab multiple pieces of paper to shred. One piece, a twirl, and thumbs up, his was a routine that he adored, and it provided a sense of belonging and purpose. He was in the game, participating in the American dream, fair pay for fair work.  His checks would not amount to much but that wasn’t the point.

Christopher, born with Down syndrome and related disabilities, looked forward to going to his day program, anxiously watching for the bus to arrive at his doorstep and ferry him to his friends. He would never succeed in a typical work environment other than a sheltered one. For so many years until his death two years ago, Chris, like so many, was happily and appropriately “employed’ and his compensation matched his limited productivity. Without programs such as this, Chris and thousands of similar individuals would be unemployed and homebound.

Now, with the minimum-wage mandate in effect, programs like the one Christopher took part in are scrambling to provide these vital programs. As much as I would like him to make $15 an hour to shred a piece of paper every few hours, the government has inadvertently hurt the chances of kids like Chris from participating in sheltered employment training that pays piecework opportunities in nonprofit disability training centers across the country. For those whose earning capacity is impaired, the intent of the law is good, but the consequences are very very very bad.

Christopher and his friends deserve the opportunity to be included in the working world to the best of their abilities; not forced to stay at home with only the television set as their friend, because of their inability to work efficiently enough to deserve the legal minimum wage.

October is National Disability Employment Awareness Month, and it is my hope that organizations that serve the disabled community will fight back and tell politicians that eliminating special minimum wages does away with programs that provide job training and basic skills to hundreds of thousands of deserving people across the country, people like my son.