Chrissy Costanza: Not Your Everyday Caregiver 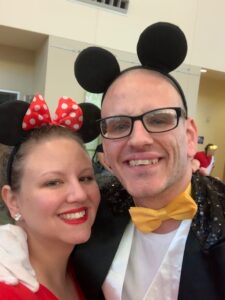 Pretty much everyone who gets nominated for a Christopher Smith Foundation caregiver award is deserving of recognition. But few have a story like Chrissy Costanza, who provides care for her brother and her elderly father as well, while dealing with her own disabilities. Chrissy’s brother is Joey Costanza, who is a much-loved fixture at Opportunity Village, where he works in the shop and as an Opportunity Village Ambassador. In addition to caring for Joey, now 34, Chrissy keeps an eye on her father, Tony, who is in the early stages of Alzheimer’s disease.

“I’m actually disabled myself now and no longer work, so I stay home full-time with them,” Chrissy explains. “I have Ehlers-Danlos syndrome, where my joints can dislocate when I walk, so I have physical limitations. It’s easy to fall and I wear braces.”

Chrissy was a Capital Campaign Project Manager at Opportunity Village before taking on the full-time life of caregiver in March of 2018. “We lost our mother when we were teenagers,” she says, “so I’m kind of the mother figure to Joey, which has added to the caretaker role I think. It can really be difficult some days, but it’s something I’ve always wanted to do. Our mother passed when Joey was 13 years old and he moved into Desert Regional Center, and ever since he left I always wanted him back home, and I always wanted to care for him again since I was a teenager. It’s something I always wanted and I didn’t care how hard it was going to be. So 19 years later it finally happened. We were kind of both lucky and unlucky when our father became ill and I moved in with him, so financially I was able to live with him and take care of him and take Joey in with us. Now I’m able to care for Joey and have my dad there as well.”

“It was crazy because I’ve worked with Linda Smith on so many things,” she says of receiving a CSF caregiver award. “I’ve talked to her about so many things with developing the Christopher Smith Foundation, and then to think that she’d actually think of me for an award! I mean, I feel like I’m just doing my job, I’m just being a sister, I’m not doing anything extra, I’m not working late hours and coming home late to my family because I’m taking care of patients at a hospital or something like that. I’m just being a sister.”

“It’s tough,” she continues, “and it’s tough on me, but when Joey goes to work I work on me, so when he gets home I can give him all of my focus, and we make it work. He’s considered mild to moderately mentally retarded, and he has OCD and Tourette’s, and he has some physical limitations. He does different events in the community where he represents OV, like when they do check presentations, grand openings of things, the Magical Forest, the Santa Run, different marketing things he enjoys. I drive him to those events and stay with him the whole time.”

In terms of getting a caregiving award, Chrissy says she doesn’t know what the big deal is. “He’s my brother! This is just what you do for your brother. To me, I’m not doing anything spectacular, he’s my brother, and even if he didn’t have any disabilities I would take him in if he needed me to take him in. I don’t know what it’s like to grow up with a sibling doesn’t have any sort of disability, and I think that’s sort of a blessing because I’ve become so close to my brother, and without him I wouldn’t have the passion I have for people with disabilities. He’s taught me so much. I’m blessed to have him.”